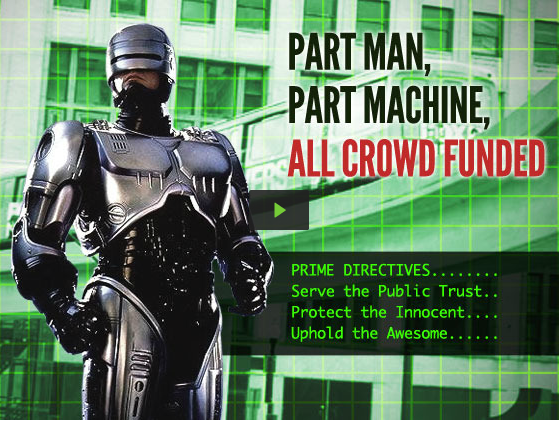 Part Man, Part Machine – do you remember? The Project Imagination Station Detroit has raised $67,430 on Kickstarter (incl. video) for building a RoboCop monumental in Detroit where the movie was shot in 1988. The question had come into the mayor’s office via Twitter from someone who later tweeted that the idea had been a joke. But by Thursday, more than 4,000 people had joined a Facebook page to support the idea of bringing a RoboCop statue to Detroit, and a group of artists pledged to raise $50,000 to fund its construction in an online campaign.

How can you raise money for your project? 6 steps and tips to raise money through crowdfunding:

Step 1: The Story. Ask yourself for what kind of idea would you pledge money? Develop a unique story that creates pictures in peoples minds. They want to be a part of something that matters and changes a life or a local view on things. Maybe you use a small video or ask (like the Imagination Station Detroit did) your favorite local artist to support your “About Video”  with a call to the crowd or even a song.

Step 2: The Platform. Find a platform for collecting money and displaying your project:

Step 3: Project Description. Describe your project in a lively and inspirational way. Bear in mind that most of the readers are creative people like you. It doesn’t have to sit a business plan behind as long as it’s a common creative and inspiring idea (like RoboCop). When describing the idea, try to target the audiences you need for this project.
Also think about a key visual which describes best what the effect will be.

Step 4: Crowd Benefits. Where lies the benefit when pledging for your project? Like the RobocCop project, a few small things can make sense to locals to fund your project. Think about…

Step 5: Marketing. Develop a step-by-step plan of how you can market your idea. Each crowdfunding platform supports you with tips and tools for marketing.  You should simply start with the low hanging fruits – your own network. Convice your friends about the project (don’t be disapointed of they don’t spend their Euros or Dollars!). If you have an already existing fanbase, start with them.  I suggests using the first-person voice in your description and appealing to people’s emotions. Video-accompanied projects on Peerbackers.com attract 125% more funding than those without videos, says Sally Outlaw from Peerbackers.com.
You can also call a local advertising or marketing agency to support your visionary project. Wildstyle Network for example supports 1-3 projects each year and works for no money. In case you have a great project to be supported, give us a ring on +49 351 79625 00 or email to steve.nitzschner (at) wildstyle-network.com

Step 6: Reporting. Report the steps you make to your audiences. Always update your profile on Kickstarter or Startnext to let people know you are still burning for the project!

More and updated sources:
How a successful Kickstarter campaign is launched. (Business Insider)
Why Jim Clark broke up with Kickstarter (VentureBeat)

Last but not least: Keep it legal!

Anything · Out of Home Specials
Tags: Crowdfunding, Detroit, funding tips, How To Crowdfund, Kickstarter, RoboCop, Startnext, tips
Share
By Steve Nitzschner About

When The Lights Go On Again – The Morning After
Anything
Tags: Berlin, Clubs, Nightclub, Pictures, Tape Club

When The Lights Go On Again – The Morning After

Shawn Saleme has reviewed an article from Zeit Magazine about the two photo students...

No Oil In Canary Islands

The Clean Ocean Project is calling with some effectful visuals for your help to...

How Sadness Can Inspire

After holding a speeach in Berlin about how morning erections can become your daily...