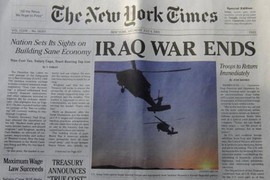 A faked edition of the “New York Times” has hit New Yorks streets on Wednesday. Over a million samples were distrubuted around Time Square/New York. A group called “The Yes Men” – a union of pacifists and human rights activist accuse George W. Bush and his government because of supposed mass destruction wepons in Irak.This action is a very strong guerilla idea (of course only viable by NGO groups) making sure people will not forgot Bush as the executioneer of the Irak war!
I haven’t found out how New York Times has been reacting but I’ll keep investigating!

UPDATE: Alright, NYT newspaper just announced a short comment “This is clearly a fake New York Time” (of course it is) “at this time we try to find out about backgrounds…” – well,, if I would be New York Times, I just would stay quiet and let the Guerillas do the marketing for me! But that’s only my opinion.

6 Tips To Raise Money Via Crowdfunding.
Anything · Out of Home Specials
Tags: Crowdfunding, Detroit, funding tips, How To Crowdfund, Kickstarter, RoboCop, Startnext, tips

Part Man, Part Machine – do you remember? The Project Imagination Station Detroit has...

When The Lights Go On Again – The Morning After
Anything
Tags: Berlin, Clubs, Nightclub, Pictures, Tape Club

When The Lights Go On Again – The Morning After

Shawn Saleme has reviewed an article from Zeit Magazine about the two photo students...

No Oil In Canary Islands

The Clean Ocean Project is calling with some effectful visuals for your help to...