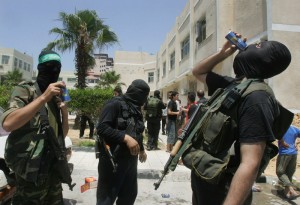 Palestinian militants from Hamas drink energy drinks as they celebrate their capture of the Preventive Security headquarters during fighting with Fatah loyalist security forces in Gaza City, Thursday, June 14, 2007. Hamas fighters overran one of the rival Fatah movement’s most important security installations in the Gaza Strip on Thursday, and witnesses said the victors dragged vanquished gunmen from the building and executed them in the street. The capture of the Preventive Security headquarters was a major step forward in Hamas’ attempts to complete its takeover of all of Gaza.(AP Photo/Khalil Hamra)